The International Fleet, later known as the Interstellar Fleet, was a military organization formed to protect Earth from the Formics after the end of the First Formic War.[1]

It later became the military arm of Starways Congress.[2]

After the end of the First Formic War, the nations of the world came together to establish multiple governments, militaries, and leadership positions to defend Earth from future attacks from the Formics. Along with the creation of the Hegemony and the offices of Polemarch and Strategos, the International Fleet was formed to be a military presence in the Solar System, protecting the human race from any hostile aliens who try to invade.[1]

After its formation, the International Fleet began researching experimental weapons and establishing outposts in both The Asteriod Belt and the Kuiper Belt. However, the organization was plagued with bureaucrats that were more interested in furthering their careers than winning the fight with the Formics.[3]

Following the Second Formic War, the Fleet declared that they had positioned a huge navy of ships beyond the comet shield to guard against a future attack. In reality, they had begun sending armed starships to the homeworlds of the Formics, to launch an invasion against their planets.[4]

The International Fleet also sent Mazer Rackham on a starship in order for him to age slower and still be alive to command the fleet when it arrived at the homeworlds of the Formics. Mazer took himself hostage and said he would not return to Earth unless they found a different fleet commander, and arranged to have the young Hyrum Graff set up the Battle School and other institutions to train possible candidates.[5] 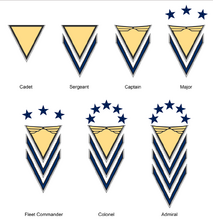 When the fleet arrived at the Formics' solar systems, the I.F. had found its commander - Ender Wiggin. Through weeks of grueling battles against an inscrutable opponent, Ender and his Jeesh emerged victorious by firing the Molecular Disruption Device at the Formic Homeworld, annihilating the Hive Queens and destroying the Formics for good.[4]

After the Third Formic War, the I.F. was banned from operating on Earth except in the event of another alien invasion. They continued to be a military presence in the Solar System. They worked in conjunction with the Ministry of Colonization to administrate Fleet School, a training center for future colony explorers and governors.[6]

Sometime before 300 AX, the International Fleet was reformed into the Interstellar Fleet.[7]

After discovering that xenobiologists Miro Ribeira and Ouanda Figueira had contaminated the still-developing culture of the Pequeninos, Starways Congress ordered that the Fleet send 16 ships to Lusitania in order to evacuate the colony and avoid more cultural contamination. However, when the Lusitania colony cut off its Ansible connection and rebelled against Congress, the fleet was ordered to destroy the planet with the Molecular Disruption Device.[2]

As news of this spread across the Hundred Worlds, Valentine Wiggin, still operating under her pseudonym of Demosthenes, published a scathing denunciation of the fleet, calling it the Second Xenocide.[9]

Decades passed, and the fleet was nearing Lusitania's solar system. After Peter Wiggin II and Si Wang-mu convinced Congress not to destroy the planet, Congress gave the order to the fleet not to launch the weapon. However, Admiral Bobby Lands, the commander of the fleet, acted otherwise and launched it, defying Congress's orders. Seeing that the Fleet had rebelled against Congress, Jane managed to move the M.D. Device back into the flagship's cargo hold, saving Lusitania from destruction.[10]

WAMRED was the International Fleet’s Weapons and Materials Research Division. The purpose of WAMRED was to test any new technologies developed that could be used to attack the Formics. The division was stationed in its own space station. Mazer Rackham and his breach team, consisting of him, Rimas, Shambhani, and Kaufman, were a part of this division.[3]

The International Fleet utilized a variety of ships to accomplish their objectives, ranging from personnel shuttles to interstellar warships. All of their ships by at most 2 AX were coated in Nan-Ooze to protect them from possible openings.[4]

This small craft was primarily used to transport Fleet personnel between I.F. installations and bases. The shuttles were notably used to transfer new Launch Groups to Battle School.[4]

The International Fleet starfighter was the primary warship for attack and defense in the Third Formic War. Each warship carried a small complement of fighters.[4]

Retrieved from "https://enderverse.fandom.com/wiki/International_Fleet?oldid=20373"
Community content is available under CC-BY-SA unless otherwise noted.